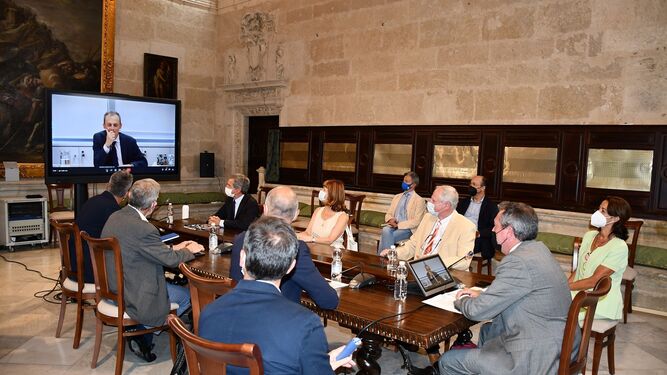 The mayor of Seville, Juan Espadas, and the delegate of Urban Habitat, Culture and Tourism, Antonio Muñoz, have held a working meeting with a delegation from the International Astronautical Federation with the aim of strengthening Seville’s candidacy for the international congress of Astronautics of 2024 that would have an economic impact of 15 million euros and a forecast of 6,000 attendees. In this meeting, which is part of the visit that the international delegation is making to the city, the Ministry of Science and Innovation has shown its express support and commitment to the candidacy. The National Institute of Aerospace Technology, the Andalusian Aerospace Cluster, FADA CATEC, the Andalusian Aerospace Forum and Contursa have also been represented.

This event would promote the municipal strategy to support the aeronautical industry and attract investment, and would also have a high direct economic impact. Specifically, more than 6,000 people are expected to attend for a period of between eight and ten days, with an economic impact of 15 million euros. At this level, it would be the most important congress of all those that have been held at FIBES.

Seville’s candidacy will be defended at the International Astronautical Congress that this year will be held at the end of October in Dubai where, where it will compete with other capitals from different countries of the world. In this process, it has the backing of the Ministry of Science and Innovation of the Government of Spain as it is a congress that will make a significant contribution to the future of the aeronautical industry in Spain.