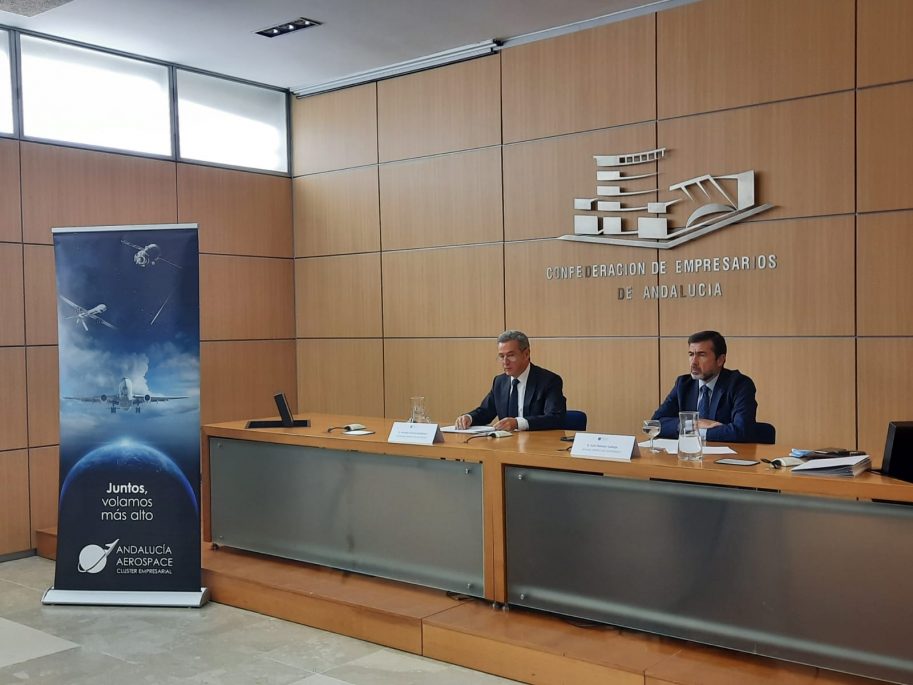 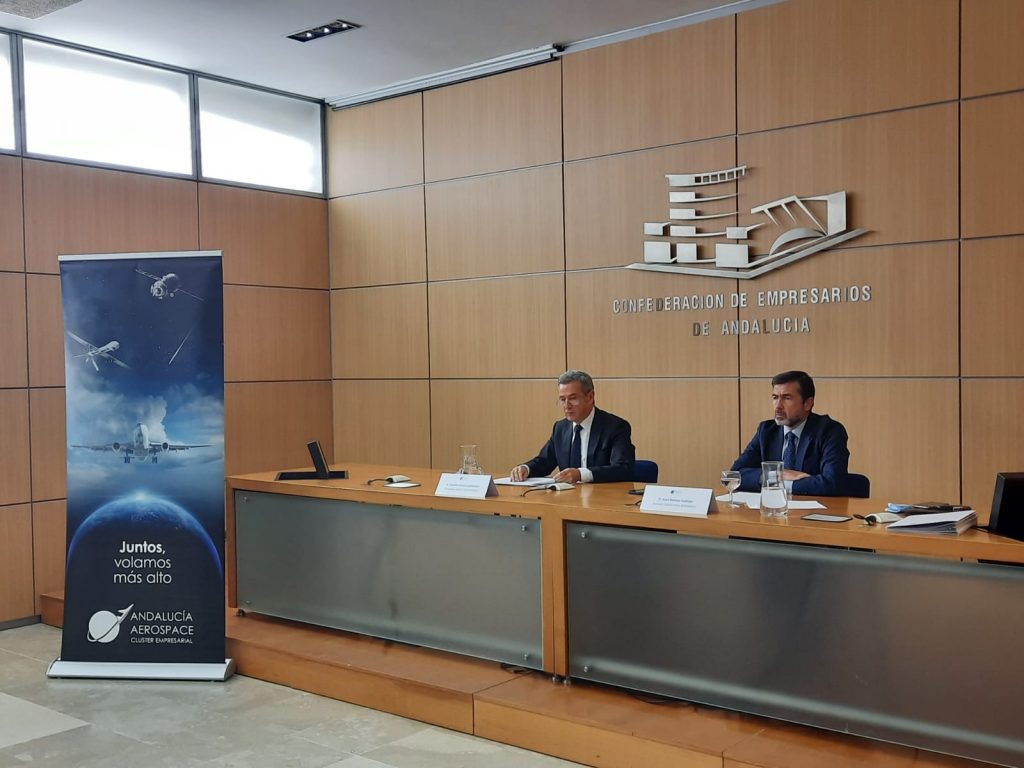 11-22-2021. Andalucía Aerospace, despite the crisis in the sector after the pandemic, continues to grow in the number of partners. The cluster promotes work to recover the sector in areas of internationalization, innovation and diversification of activities.

The president of Andalucía Aerospace, Antonio Gómez-Guillamón, and his managing director, Juan Román, held a meeting with the specialized media this morning at the Confederation of Entrepreneurs of Andalusia (CEA), in which they reviewed current affairs of the sector and the same cluster taking stock of the impact of the pandemic.

In the first place, Gómez-Guillamón remarked that, despite the current difficulties of the Sector, the cluster continues to grow in number of partners and already has 76 companies among aeronautical partners and collaborators, who represent more than 70% of the total turnover of the sector.

So far this year, seven new aerospace companies have joined the cluster: Ningenia, Geci, Studec, Dekra, Ensia, Alter and MCE. They are companies engaged in very diverse activities (engineering, testing and testing, industrial and also in the Space segment) as a sign of the comprehensive capabilities shown by the sector.

On the other hand, 20 service companies that are linked to the sector continue to accompany the cluster, highlighting that in 2021 Ansys, a simulation technology company, and Caixabank, as a financial institution of reference for the cluster, have joined.

Collaboration agreements have also been signed with the Cádiz naval maritime cluster, the Railway Innovation Hub located in Malaga and with the Air Force. With all of them, synergies have been identified that will benefit both parties. 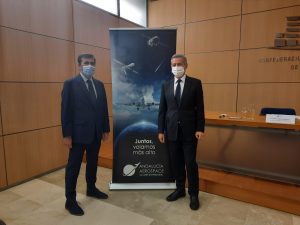 The different Commissions of the cluster are promoting actions and activities that promote the sector. This year a new Internationalization Commission has been created after the agreement signed with Extenda to reinforce actions that help Companies to reach new foreign markets, as well as to reinforce the Andalucía Aerospace brand.

The Human Resources Commission has been working with the Employment Department to launch an Aerospace Training Plan for employed persons that will involve the completion of 124 courses to train 1,860 students in the sector, with a budget of 1.9 million euros.

The Space and Innovation Commission has been involved in the different European calls, CDTI and IDEA Agency to develop R&D programs, such as the Aerospace Technology Plan or also in the call for Aids for aerospace SMEs that was finally launched by the Ministry of Economic Transformation. For its part, the Space segment created a group of companies interested in developing a 100% Andalusian Nanosatellite, a project that it is leading from the Solarmems cluster.

The Specialist Companies Commission has fostered the generation of synergies in consortiums between these companies and is shaping these alliances to target new markets. In this sense, they recently visited Evora in Portugal to meet there with significant companies in the Sector such as Embraer, Lauak or Mechatronic.

On the other hand, the cluster continues to be linked to various European projects such as Prestigious and Asset +.

Prestigious is a European project co-financed by the COSME program of the European Union to strengthen the competitiveness and sustainability of SMEs operating in the drone sector in Europe.

Asset + is an alliance of 30 entities between various European countries to develop Defense Technology strategies.
In another vein, Antonio Gómez-Guillamón took stock of the situation in the sector, highlighting that this had been one of the most affected by Covid-19 when air traffic paralyzed. The airline crisis has a direct impact on the industry by paralyzing new orders for aircraft construction.

As a consequence, the 2020 sector’s turnover fell by 27% compared to the previous year, which amounted to 2,071 million euros, according to the data managed by the cluster. In the same way, employment also fell, but to a lesser extent than turnover, leaving 12,177 direct jobs, which is 16% less than in 2019.

Andalusia Aerospace executives pointed out that they are facing a long-term crisis, greater than in other sectors, which will be more affected for “double aisle” aircraft, those used for intercontinental flights. Therefore, they appealed to the need for Administrations to support more than ever a strategic sector for Andalusia, which continues to contribute 1.41% to Andalusian global GDP and leads the export rankings.

These aid to the sector must be marked by the implementation of the Andalusian Aerospace Strategy 2020-2027 which, they insisted, should begin to develop the actions contemplated there. That Plan, they recalled, contemplates investments amounting to 572 million euros to promote technologies, certifications, new products and markets, training and, in general, to enhance the aerospace ecosystem.

Frustration was also expressed at the lack of information on Next Generation funds that should already be helping the Sector. The launch of an aeronautical PERTE has been announced, but as of the date of this meeting there are no specific details about it. They appealed to the Administrations to urgently inform the sector of how these European funds are going to be used and how they are going to reach the entire Industry.

Finally, the president of the cluster wanted to send a message of optimism regarding the future of the sector despite the current difficulties it is going through. He is confident that high levels of activity will return to the industry with the full recovery of domestic and international flights, which will lead to an increase in production rates again. The role that the A400M has played in the evacuation from Afghanistan this summer or bringing medical supplies to Europe in the toughest moments of the pandemic was vindicated. For this reason, he is confident that the sale of this aircraft can continue to increase.

New opportunities will also emerge in emerging businesses such as unmanned vehicles or UAVs. For this reason, the importance of the CEUS del Arenosillo project in Huelva going forward, as has been transmitted from the cluster to all the competent authorities.

Andalusia Aerospace is also committed to the development of the MRO or aircraft maintenance. Recently, all the partners had a meeting with the main executives of Ryanair in Seville to learn more about their expansion projects.

And another opportunity will be the New Space. The cluster values ​​very positively the incorporation of Alter Technology, a company specialized in Space, which is going to reinforce the initiatives in these new businesses.

Regarding the situation in Cádiz, the cluster is committed to finally completing the project of the Advanced Manufacturing Center (CFA, For its acronym in Spanish) that will undoubtedly help especially Cadiz SMEs to continue developing innovation projects and transformation of their production processes. The importance that the province of Cádiz has always had in the Andalusian aerospace sector was pointed out and that this specialized business ecosystem that already exists should continue to be maintained.